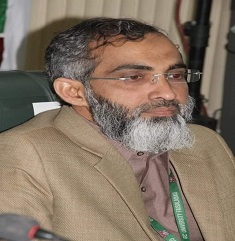 The vision of the department of Islamic Studies is seek to advanced knowledge & understanding of classical and modern Islamic religious thoughts and Islamic textual traditions and to provide understanding of Islamic culture and intellectual history in the pre modern and modern period. So they can solve the contemporary issues and introduce Islam as religion of peace, tolerance mutual harmony.

To present Islam as a code of life based on the revealed knowledge of the Quran & Sunnah. To ground in a study of Islam as worldview, civilization & living reality. To engage student in exploring primary texts, history, global Muslim communities and the regional issue of the Islamic world. To provide the closer look at the various histories of Islam in places such as the middle east, Africa, south Asia and Europe.

Government College University Faisalabad started its journey to deliver the education more than one hundred years ago. The subject of Islamic Studies was offered in 1955-56 while before the partition of subcontinent the course “Deenyat” had been offering by Mr. M. Abdullah Kamil. Department’s Pioneer role was played by Prof. Iftikhar Chishti & Prof. Dr. Muhammad Ishaq Qurashi (a famous national personality). Later on in 1985, the department of Islamic Studies was established. Since its establishment, the alumni of this department have been contributing to the various institutions in country and abroad. Presently, the department is offering four programs following HEC criteria. Two research Journal “Zia-e-Tahqeeq” & Al-Ihsan have also been launched to highlight the intellectual efforts of the faculty members and students. Seven issues of the journal Zia-e-Tehqiq and three issue of Al-Ihsan have been published. Furthermore “Seerah Chair” and Tasawwuf Study Centre” were established in Department of Islamic Studies & Arabic for promoting moral values, harmony and peace in all spheres of Human life. Department has organized three National Seerat Conferences, two International Seerat, two National Taswwaf, Qiraat & other Seminars and workshops. In 2013, the department of Islamic Studies was renamed as “Department of Islamic Studies & Arabic” by the Competent Authority. Department is also offering MA (2Years) & MPhil (2Years) program through Distance Learning Education. So, that the quality education could be delivered in an affordable & an accessible way in the field of Islamic studies.